Currently, it has been introduced to more than 170 companies and is being utilized in factories, warehouses, hotels, inns, and airports.

To get to know about CarriRo® please check the below video.

On this page, we would like to introduce CarriRo AD (Autonomous Moving mode model), which is equipped with the autonomous mobile function in the CarriRo. 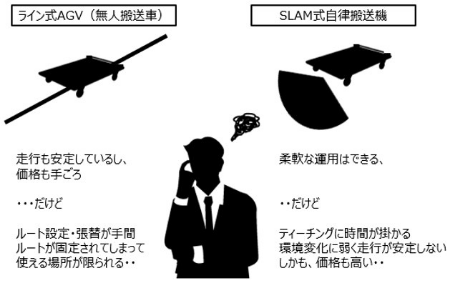 Meanwhile, SLAM-type automatic conveyance system are suitable for flexible operation because it is possible to set routes by mapping the environment using a laser sensor and performing work (giving instructions) to remember the route.

However it can take about half a day to be familiar about the technology or external environmental change such as the position of goods and shelves, it affects self position estimation and it causes errors. There are cases where it can be seen that it stops halfway. Also, since the laser sensor itself is relatively expensive there is also a problem that product prices are also generally high making it difficult to secure profit.

CarriRo® AD realizes Autonomous Driving by applying the Image Recognition technology cultivated by ZMP and using the method called CarriRo® Visual Tracking (patent pending).
When CarriRo® AD follows the landmark sticker, we receive position correction and travel instruction information at the same time by Image Recognition and by repeating this, it reaches the destination. 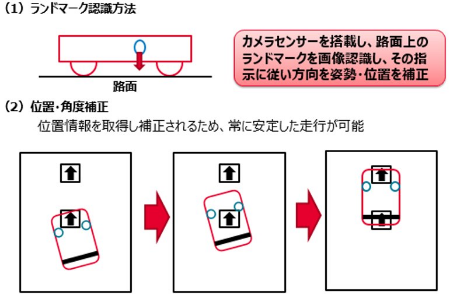 How the Autonomous Moving model works

There are two types of landmarks.

On the other hand, by attaching a Variable type landmark we can change the traveling route each time by using tablet. 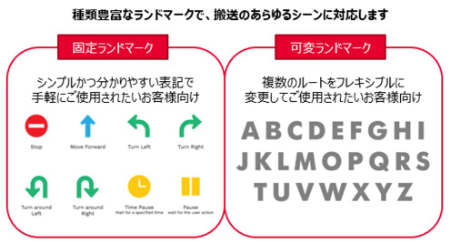 Adopting a Following model (CarriRo® FD) in a reasonable manner

In addition, the model with the follow-up function of the logistics support robot CarriRo will be sold in parallel even after the sales of the Autonomous Moving model.

Therefore, the Autonomous Moving model CarriRo AD can be used as the head, followed by the model equipped with the follow-up function CarriRo FD, and can also be used for unmanned convoy transportation with three units. By introducing such a system, it will be possible to introduce it at a much more reasonable price than when using the autonomous mobile model.

Please do not hesitate to contact us for further information and demonstration.
​ ​

ZMP related products that contribute to the logistics

In addition to the logistics support robot CarriRo, below are some related products which can be chosen according to the application. Mobile platform for research and development