About the approach between ZMP and Komatsu

IZAC® is a software platform for Autonomous Driving.

By connecting a sensor to a computer (PC) equipped with IZAC® and making it recognize it is possible to control every machine by making judgments and controlling through IZAC®'s control components. Through IZAC®, you can do all the cognition, judgment and operation necessary to move the machine.

In addition, IZAC® was designed and developed from the scratch as a middleware and environment specialized for Autonomous Driving automobiles on public roads. It has been adopted as a platform for demonstration tests of Autonomous Driving that ZMP has been doing so far.

In addition to this construction project, it is utilized cross-cutting by various projects such as Autonomous Driving vehicles, buses, delivery robots and so on.
​ ​Click here for details

In this project, RoboVision®2s is installed as a sensor that senses the outside world. It is possible to detect objects, measure the distance to surrounding objects and so on.

RoboVision 2s was developed as a robot eye, and operates with USB power supply in a characteristic compact housing like a hero's glasses, connecting a cable to a PC, this is a stereo camera that can easily acquire images using a dedicated application.
has been introduced to more than 100 companies and universities and has been adopted as a tool for R & D, Autonomous Driving and ADAS development.

In addition, ZMP also released "RoboVision®3", a four-lens stereo camera that can sense a distance and field of view that has a maximum measuring distance of 150 m and a horizontal viewing angle of 100 °.
It can be used for the detection of oncoming vehicles from a distance when turning right at the intersection which was difficult in the past and for wide detection of pedestrians and vehicles at the intersection right turn.
​ ​Click here for details

ZMP also offers a variety of other products that support Autonomous Driving.
As a part of it, RoboCar® series which can be controlled from programs, RoboVision®3, a stereo camera capable of measuring a distance up to 150 m and horizontal viewing angle 100 °. Position-Z which can measure GPS and atmospheric pressure and can transmit on CAN, IMU sensor IMU - Z2 that can measure acceleration, gyroscope and geomagnetism by Bluetooth. We have a lineup of products that can be utilized for various technological developments.
For product details, please refer to the following. 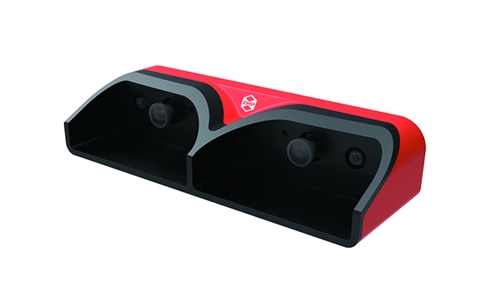 A stereo camera capable of sensing a distance of 150 m and a horizontal viewing angle of 110 °.
Click here for details